So I’ve been a little slow with regular posts.  But the last sliver of summer was packed full – almost no time for knitting!  (Of course I always fit it in.  Even if it was at 2:30 a.m. when I was stressing out and couldn’t sleep…).  And now it’s back to the first week of college classes…sigh. At least I’m a senior this year 🙂

I think I’m at a record right now – I can count all of my WIPs on one hand (and a finger): a modern fair isle sweater, a double moss stitch pullover tee, a blanket, a sock, and a scarf.  Technically, the scarf doesn’t count, as that will be frogged – it’s been in progress for about 2 years.  And the sock has been taking a break – what do knitters call that, hibernating?  AND, the blanket has been in progress for about 6 years.  (It’s elevated to the status of being mentioned in my Ravelry “about” section.)

About that fair isle sweater.  I bought the kit probably 5 years ago from Knit Picks.  It uses their discontinued Telemark sport weight wool yarn.  And I finally started it this year, back in April at a knitting retreat that I attended for one day (my first one!!  It was so exciting).  It took about 6 hours to complete the ribbing for the body…which was so much knitting…

The pattern’s cover, showing off the entire sweater: “Norwegian Lusekofte”

It’s kind of funny that I started it this year as Knit Picks re-released the same pattern, but under a different name and with their Wool of the Andes sport wool.  Anyway, I didn’t choose this pattern very carefully, like the last sweater I just finished (yeah, that green one).  There are set-in sleeves, which sound scary, as well as steeks, and (it looks like) lots of finishing tasks.  Oh brother.  But hey, it should look pretty cool when I’m done!  And it’s my first color knit sweater! 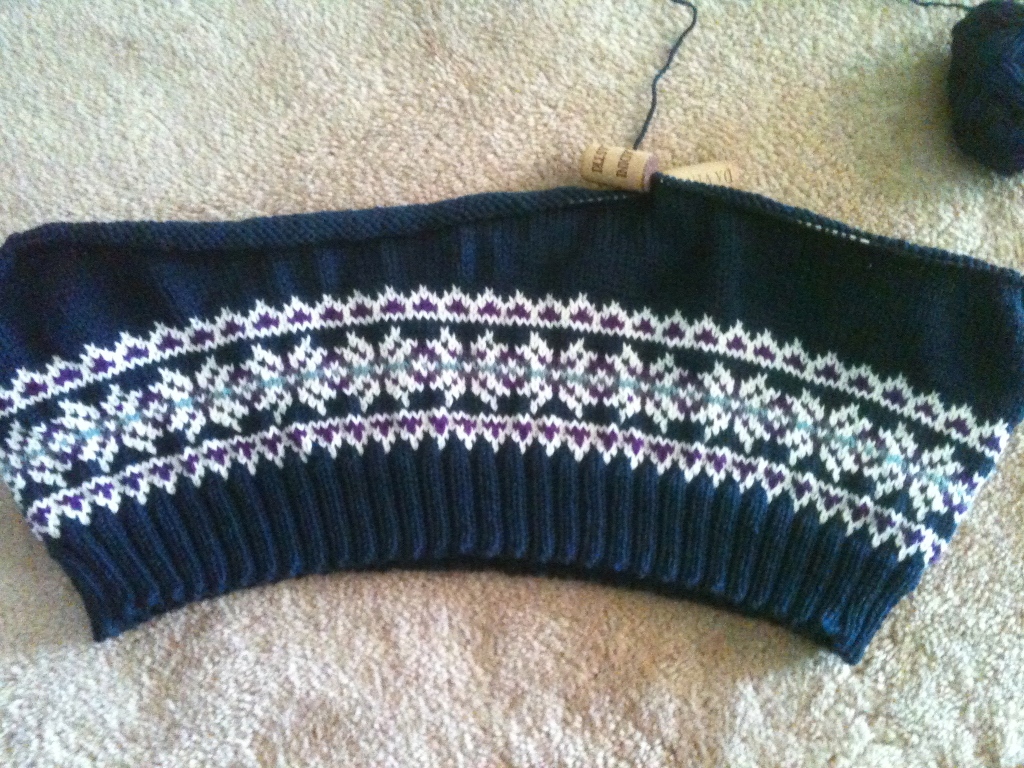 Yes, those are corks I’m using as needle tip covers. Got the tip from Darn. Knit. {Anyway}!

That is, if I ever get it done.  The body needs to be about 16.5″ from the CO edge before I start the color knitting in the chest.  Yikes!

However, there’s some comfort with just repetitive, plain ol’ knitting in the round.  It’s a good go-to project to de-stress, even though it’s not quite as portable as socks.

Detail of color on bottom edge

Wish me luck as I try not to get bored and cast on for a smaller project!  I don’t know how knitters make the traditional fair isle sweaters with color changes about every row…maybe someday I’ll get there.  But for now, I just hope to get this done by next summer, as a fair entry!

Thank you for sharing: