I felt like I sounded pretty negative in my previous post about this project.  I mean, it did take me over a year and a half to finish – and I barely missed the deadline to enter it in our county fair.

However, the finishing was pretty painless.

I’m glad I incorporated the body hem as how I wrote in the first post – that saved a lot of sewing.  But, the cuff and neckband weren’t too bad, and didn’t take that long.

Here’s how I completed the neckband:

Somehow I ended up with fewer stitches than written after completing the raglan decreases.  This made for a narrower neckband from left to right.  (Which I prefer, anyways.)

Then I knit the purl round for turning the hem, and knit 9 rows.

I realized that I didn’t want to end up with a tight bind off, nor would I want to try to lay the hem flat to sew it down.

So, I cast off with a crochet hook a little larger than the needle thickness.  Here’s a tutorial.  It’s just knitting, except your right hand will swap out its knitting needle for a crochet hook. 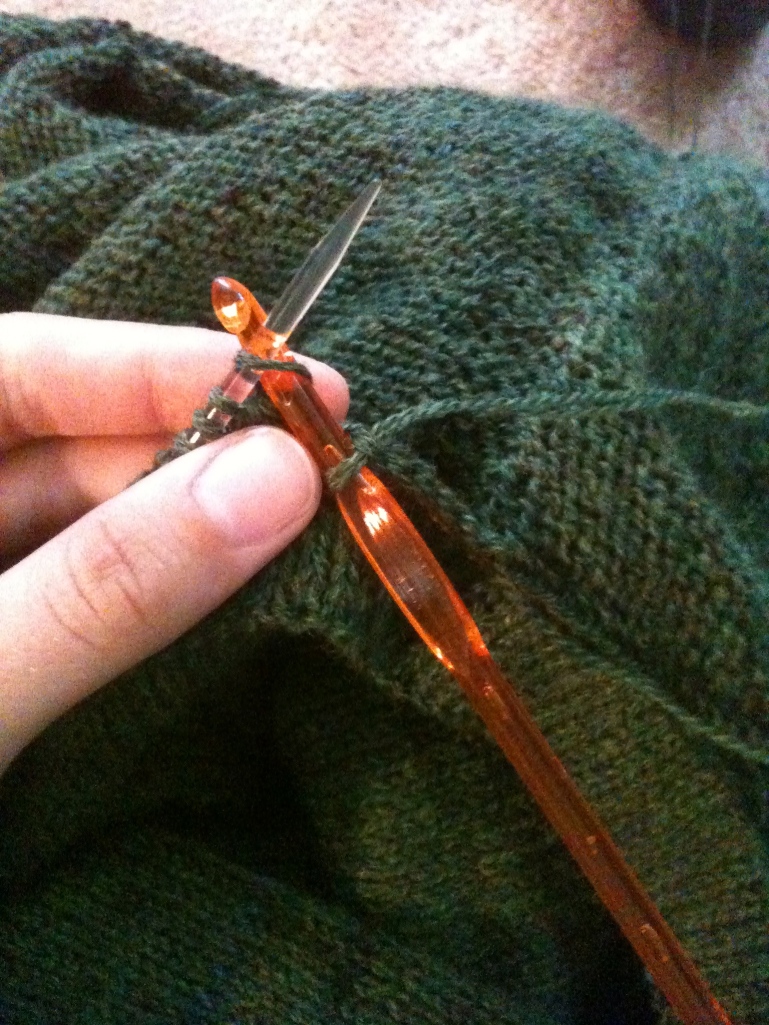 I turned my sweater inside-out to cast off.

As I was casting off, I’d stop after I had about two inches of bound off “edge.”  Then I sewed the neckband down with one strand of my MC, catching one loop of the cast off edge and a stitch from the sweater – a basic whip stitch.  Then I continued casting off, sewing down the edge, etc.

Getting the neck bound off and sewn down – both at once!

This took a little time but it came out just great.

After the neck, I whip stitched the cuffs in the same manner.  Since I left a long tail when I cast on for them, I just used the double strand left to sew them up.

Sewing in the tails was boring but necessary . . .

And finally, I sewed the armpit holes together with a double strand of yarn.  It’s like grafting, except the stitches are bound off; they aren’t “live.”

And (actually) finally, I tried on the sweater (this may have happened before I seamed the armpit holes – I was a little excited).  Lo and behold, this baby fit like a dream.  So good, in fact, that turning it into a cardigan became no longer necessary!!

Before blocking – bottom hem not quite flat.

Call it luck or a good pattern (or even a hint of laziness from my part), but I loved how it turned out as a pullover, and I didn’t want to change it.  The subtle stripes add interest, going from light green to brown to blue, and it’s so soft and light.

The first photo on this post shows it being blocked.  (And, really, finally the last step) all I did was pin it out and spray the hems and the sides of the body with water.  It lays very well, otherwise.

So I guess I changed my mind – I enjoyed this pattern, and I ended up chosing wisely!

I am trying to keep myself from looking at Knit Picks’ yarn for a second one. . .

Thank you for sharing: